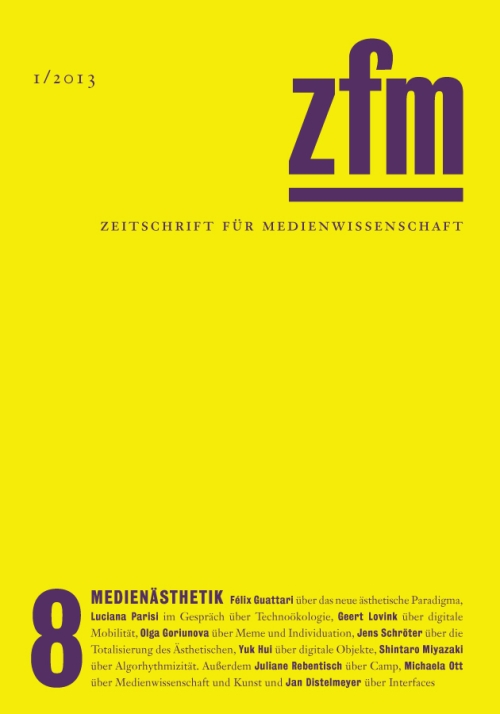 The text, originally published in 1992, is a central component of Guattari’s late work, which deals overall with the reconceptualization of the machinic constitution of subjectivity, emphasizing, among other things, the cartography of contemporary subjectivity characterized by new media techniques as a central task of critique. The new aesthetic paradigm focuses on the epochal privileging of aesthetic sensibility that crosses all spheres of value, or in other words, on general aestheticization as a salient feature of the present. The text presents a concise genealogy of subjectivity: it characterizes polysemic, animistic, transindividual subjectivity by means of a proto-aesthetic paradigm. Here, neither interiority and exteriority nor subjects and objects are strictly separated from each other; the economic, social, religious, political, and aesthetic spheres of value are not fully differentiated. The text contrasts this subjectivity to the modular, transcendent subjectivity implemented in particular by capitalist modernity, which originates by isolating the various spheres of value and subjective capacities from one another. This is also the site where something like the aesthetic capacity and an autonomous sphere of aesthetic value (the beautiful) crystallizes. Finally, as a third type – which is, as the text emphasizes, «forward looking», since in any case it is still emerging at the end of the 1980s and the beginning of the 1990s, fostered by media technology – the text introduces processual structures of subjectivity that give overall priority to creative processes and phenomena of emergence on all levels and bring about an overall general aestheticization of all spheres of values and capacities. Here, a process of shifting takes place in the sense of the aesthetic.