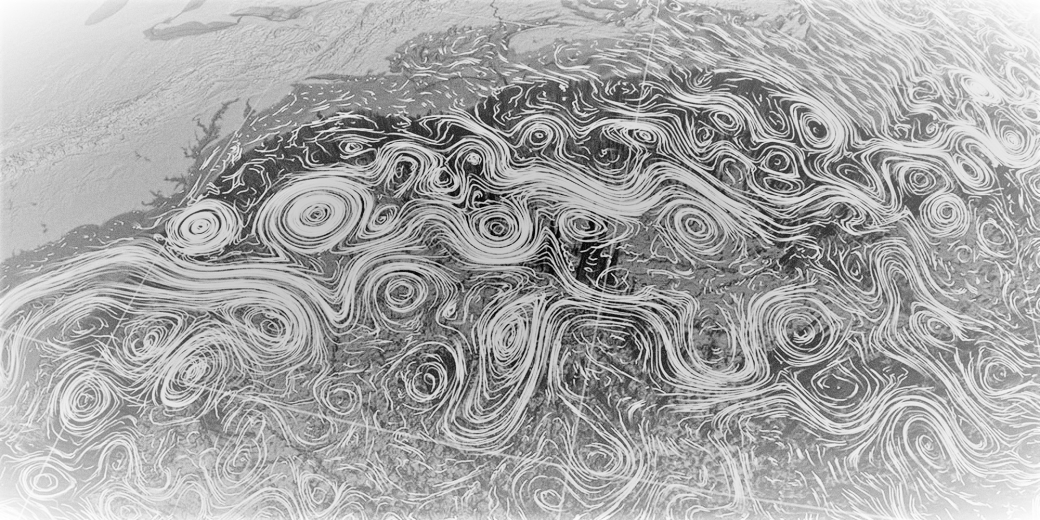 A Forum on the Actuality of the Concept. Comment by John Durham Peters

Thoughts on Circulation: Day 49 of Self-Isolation

NB: Given the world-wide lockdown on circulation in spring 2020, the study of media technologies for ordering long-term cycles can productively take a more recursive and personal approach.

In these famous lines Kohelet singles out biological, astronomical, meteorological and hydrological cycles and calls them all hevel havelim.  The Hebrew term was vanity of vanities for King James’s translators and Windhauch in the German Unity Translation.  But how odd that air and weather should be figured as signs of vanity or nothingness.  The wind can tear the roof off of buildings and flatten trees and cities.  Without wind, our planet would wither and die.  The equator would heat up like an oven and the poles sink into an irrevocable deep freeze.  The Preacher is correct that the winds must blow both north and south and then return.  The atmosphere absorbs one hundred tons of extraterrestrial matter daily, most of which burns up upon entry, but much matter is exchanged between bodies in the solar system via solar winds.  The troposphere on earth is a bubbling broth of life-forms, including pheromones and pollen, signals and germ-plasm, fungi of all kinds.  Every word we speak scatters droplets full of microflora and microfauna, and today is my seventh week anniversary of staying at home to

avoid spread of the COVID-19 virus via «aerosolized respiratory fluids».  The atmosphere distributes dust and other particulate matter globally, and every square kilometer on earth likely contains dust from every other square kilometer. Wind serves as a global thermostat, maintaining some measure of stable temperature.  As Lyall Watson argues in a beautiful book, the winds «provide the circulatory and nervous systems of the planet, sharing out energy and information, distributing both warmth and awareness, making something out of nothing».1

This is always the question about circulation: how to make something out of nothing.

All humanly monitored processes of circulation require media.  The revolution of the earth around the sun requires calendrical systems to coordinate its celestial position with civic events.  The changes of the weather have been observed through nautical tools, Bauernregel and royal databases.  The circulation of the blood has its sphygmomanometers, myographs and blood pressure medicines.  The flow of global capital needs its logbooks, chronometers, ledgers, ephemerides, charts of winds and currents, weather reports, and data networks.  To twist Kohelet (12:12) again: Es nimmt kein Ende mit dem vielen Zirkulationsmedien aufschreiben …

«La malheur des hommes vient d’une seule chose, qui est de ne savoir pas demeurer en repos dans une chambre.» Thus Blaise Pascal complained about the human inability to sit still.  He thought we were unhealthily addicted to circulation.  He lived in a age of great consciousness of circulation.  In 1628 William Harvey had explained the circulation of the blood.  In 1543 Nicolaus Copernicus had revealed the revolution of the earth about the sun: every time you celebrate your birthday you mark another circle about the sun.  Spice, gold, potatoes, syphilis, slaves, pigment, and tobacco were circulating around the earth through Portuguese, Spanish, English, and Dutch seaborne empires after 1492.  Pascal was profoundly anti-modern in his critique of circulation; he looked backwards to a monastic way of life, the irrepressible joy of being dedicated to a single cause and single place at the still point of the turning world.

Markets, states and appetites have generally voted against Pascal until the experiment of spring 2020.  Among many others, Walter Benjamin defined modernity by circulation – by traffic, by the endless lure of the commodity, by the movement of goods (and bads) across time and space, in the course of which they both gained a curious glamor and lost the truth of the labor that made them.  Something from nothing = profit.  Like Pascal, he celebrated those who resiste – by slowness, laziness or stillness.  A sentence from the Grand Larousse (1872) is found among the treasures of his Passagenwerk ( 565): «Cette ville où règne une vie, une circulation, une activité sans égales, est aussi, par un singulier contraste, celle où l'on trouve le plus d’oisifs, de paresseux et de badauds.»  Circulation invites its opposite: play and dallying, cessation and Sabbath.  Does time out mean celebration or death?  Some right-wing American politicians say they would rather sacrifice lives than the economy: for them time out does mean death.  (You at least have to give them credit for their Klartext.)

Of all points in history, only ours has a synoptic portrait of our planet’s history of circulation.  This is a digital step by Hegelian Geist.  What Kohelet mentioned as poetic fact is now well established scientific knowledge.  Our climate depends on an interlocking set of mind-bogglingly complicated cycles.  One is the lifespan of the sun, which radiates considerably more heat now than it did billions of years ago when the earth formed; its output of energy will continue to grow until the point that it incinerates the earth and everything on it.  Another is the drift of tectonic plates, which, in redirecting or blocking ocean currents, and making mountain ranges that absorb carbon and create desert regions behind their rain shadows, vastly alter climate.  Another is the periodic passage of the earth through the spiral arms of the Milky Way galaxy, which may expose it to cosmic rays from dying supernovas, inducing cloud cover and thus cooling.  The obliquity (axial tilt), eccentricity, and precession of the earth’s orbit affect its exposure to sunlight over orbital cycles of roughly 41,000, 100,000, and 23,000 years respectively.  The eleven-year sunspot cycle is the most familiar of solar periods, but there are others, such as the Hallstatt cycle of solar activity, oscillating every 2100-2500 years, which is increasingly well evidenced in planetary climate history.  Perhaps most fascinating of all is the thermohaline circulation in the oceans, a cycle taking 1000-1500 years that involves surface and deep, cold and warm, fresh and saline water currents interacting in a global slow-moving swirl that effects every ocean on earth.  It is likely that anyone reading these words--that is, anyone living near the North Atlantic – is a beneficiary of this only recently discovered planetary conveyor belt.2   Er weht nach Süden, dreht nach Norden, dreht, dreht … and keeps our climate habitable.  The value of such circulatory ecosystem services are immense: in this case we get something for nothing.

In the time of COVID-19, we might reconsider Pascal’s complaint.  Disrupting circulation can be hazardous.  If the thermohaline circulation were disrupted, much of the North Atlantic could be unlivable for humans.  But what about the circulation of capital and bodies?  Maybe here is a decent place to venture a soft version of the nature-culture divide: yes to natural circulation, no to cultural – at least for a period.  Like many others, I have only left my house for groceries, medicine, or exercise in the last seven weeks.  I am extremely fortunate to have a house and to have a job that has not disappeared.  Travel plans – to Rome and London, Quito and Provo--have been suspended, a euphemism for canceled.  My daily round is simplified.  I need not circulate.  Rather, I may not circulate: the mayor and the governor have both issued stay-at-home orders except for essential outings.  I am locked out of my campus office.  The university library is closed.  The students have been sent home from campus.  The buses that normally take me there are now all but empty and have been nicknamed by their brave drivers ten-meter-long COVID-19 incubators.  It took a microscopic virus hungry for circulation to make the world stop.  I am enjoying my seventeenth-century life.  Pascal says: I told you so!

The ancient Hebrews celebrated a jubilee year every fifty years, that is, after seven times seven years.3   The plan sounds familiar: «Jeder von euch soll zu seinem Grundbesitz zurückkehren.» They let the land lie fallow, to heal.  Debts were forgiven, grudges dropped, slaves and prisoners freed.  Property rights were released. It was CTRL+ALT+DEL on a cosmic scale.  As 2020 economy spins into freefall, rather than lamenting, perhaps we should declare a Jubilee.  For once, the Keeling curve, showing the slow, inexorable rise of atmospheric carbon, might be flat in springtime.  The sky over Los Angeles is blue.  Goats fill the city squares of Wales.  Mountain lions sleep in trees in the Colorado sububs.  Maybe we should nominate a new hero for our moment, someone who actually did live according to Pascal’s wish.  Emily Dickinson for two decades hardly left her room in Amherst, Massachusetts, but wrote some of the most volcanic, wonderful and witty poetry in American letters.  She was, in one of her lines, «a Vesuvius at home».  Her body was not in circulation, but her mind was.  She knew how to make something out of nothing. We all need such models.